Open Bionics hopes to get kids excited about their prosthetics with designs from Marvel, Frozen and Star Wars.

“[Kids] won’t have to do boring physical therapy, they’ll train to become heroes,” reads the Open Bionics website about the announcement. “They’re not just getting medical devices, they’re getting bionic hands inspired by their favorite characters.”

The Walt Disney Company is donating the time and artwork of its creative teams and providing royalty free licenses from Marvel, Frozen and Star Wars to Open Bionic for this project.

“Instead of going through physical therapy, kids will instead be able to go through Jedi training. It’s pretty amazing,” a Disney spokesperson told TechCrunch.

The startup is part of the current Techstars Disney Accelerator program. We recently met up with the team to talk about what it was working on. You can watch that interview and get to know more about this startup below: 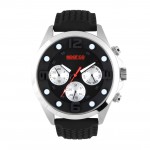