For far too long, natural products and men have been on two opposite ends of a pogo stick, but that’s all about to change. Women have predominantly been known to be more obsessed about taking a helping hand from nature when it comes to their daily personal care regimes but men are now firmly in on the action. According to a recent CNBC report, mampering has become the latest craze to hit our shores. A play on the word pampering, mampering refers to new age men who aren’t afraid to take care of themselves. Organic Personal Care is a large part of the pie when it comes to men sussing out what’s just plain good for them and what’s best. Real men aren’t afraid to […] 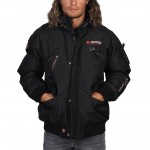 Mens hooded jacket zip and but..